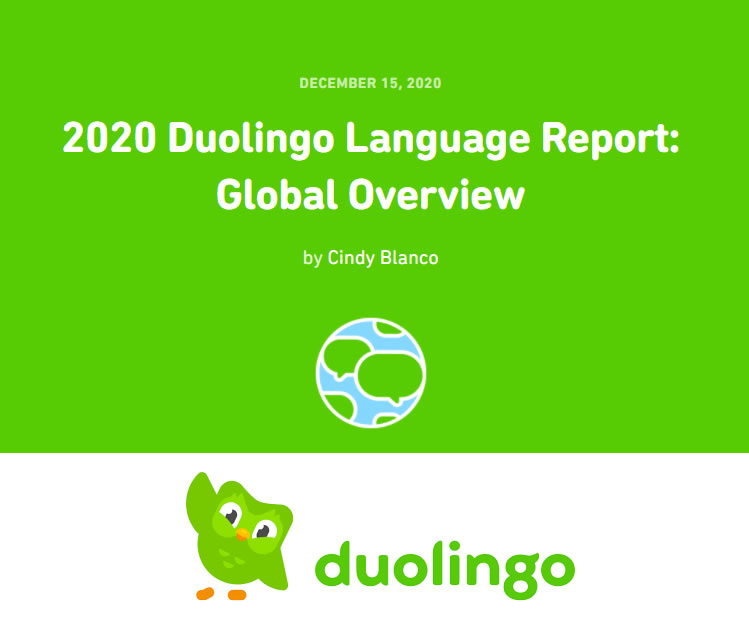 This is One of the Fastest Growing Language in the World

According to Duolingo Language Report, an annual report on language learning in the world, Korean was the second fastest growing language worldwide and ranks seventh in the most studied languages on the planet.

Although English has always been the most-studied language around the world, there has been a marked increase in the study of Asian languages, an indicator that the cultural influence of Asia on the rest of the world is rising!According to Duolingo Language Report, an annual report on language learning in the world, Korean was the second fastest growing language worldwide and ranks seventh in the most studied languages on the planet. Also, according to the report, the main motivations of Korean learners around the world are culture and travel, and are directly related to the influence of Korean culture, especially K-Pop.

The South Korean entertainment industry has emerged as a large exporter of media products. Whether producing movies, soap operas, games or music, South Korea has managed to expand its culture to many western countries.Last year, the South Korean movie Parasite was named best picture at The Oscars, achieving what no other subtitled film has done in the 92-year history of the Academy Awards, becoming the first non-English language movie to take the top prize.Producer Kwak Sin-ae, who collected the trophy, said: "I'm speechless. We never imagined this to happen. I feel like a very opportune moment in history is happening right now."The high quality of Korean films aroused the world's curiosity about the language and culture of the country, and K-Pop was an impressive success.[caption id="attachment_7262" align="alignnone" width="532"]

Since the democratization of the country in the 1980s, the relaxation of censorship, the reduction of travel restrictions, and the drive to diversify the economy have contributed to the global spread of Korean culture.The roots of Korean participation in modern pop culture can be traced back decades, but the hallyu, or Korean wave, only started after the Asian financial crisis in the late 1990s. In music, South Korean pop groups flourished internally during the early 1990s.The government wanted to spread its culture around the world - and it started in an unlikely place. South Korea's first big global hits were TV shows known as K-dramas, initially aimed at domestic audiences but finding popularity in other parts of Asia and elsewhere.[caption id="attachment_7267" align="alignnone" width="800"]

The giant size statue, gold bronze colour and erected outside the COEX shopping centre, is dedicated to the South Korean viral dance pop music hit by Psy.[/caption]The international success of K-dramas spurred careful planning for the globalization of K-pop beyond groups that had achieved national fame. As with the electronics and automobile industries, the centralization of economic power within large conglomerates allowed for efficient production under careful discipline. In the K-pop star system, this meant recruiting pop musicians and managing them through years of training and thoughtful presentation - which paid off with wildly successful pop acts like the boy band EXO, which made its television debut in 2011. EXO was conceived as a South Korean-Chinese group, performing in both languages and promoting their songs in both countries.Everyone in the world, like it or not, must have seen a K-pop related video at least once. In 2012, the world had viral hits. PSY – Gangnam Style was at one time the most viewed video on the planet, thanks to its addictive, hilarious, dance and beat. It reached number two on the Billboard Hot 100.

Hometowns of K-Pop have idols named neighborhoods after them. The federal government has created tourist routes based on the filming locations of K-Pop clips in a campaign called “Imagine Your Korea” that plays on fans' emotional attachment: “Recreate the scenes yourself, or simply enjoy the fact that your favorite member has already been standing in this exact spot, breathing the same air and seeing the same view”, says the website.The results are palpable: tourism to South Korea has tripled. Worldwide, 90 million people are affiliated with fan clubs related to Hallyu, and the number of foreign students in Korean universities has increased by 20%. Interest in the language has never been greater, and the government has opened 130 institutes to teach Korean in 50 countries.

K-Pop would have lost its biggest market had it not been for three letters: BTS. The crisis with China coincided with the explosion of the idol group in the West. Between 2018 and 2019, BTS released three Billboard #1 album in less than 12 months. The same feat had only ever been achieved by the Beatles (and of course they didn't sing in Korean). K-Pop artists began to pack stadiums around the world, from the US to Saudi Arabia. Korea gained unprecedented visibility as the Korean soft-power agenda was drawn up.Born from an agency outside the Big 3, since 2013 they have ensured their place in the sun among thousands and thousands of idols, gaining fans and recognition in Korea and achieving international notoriety. Today, they collaborate with artists such as Halsey and Nicki Minaj, as well as performances at awards such as The Video Music Awards and The Grammys. Their reach is so great that they have managed to win over a legion of devoted fans who provide many record-breakers, not only as a Korean boy band, but also as artists in general.And so, in just over 20 years, South Korea has surfed the pop wave that took it to conquer the seven seas and beyond.'Life Goes On', the last song on BTS' 'BE' album, reached #1 on the Billboard Global Chart and remained at that position for 7 weeks. BTS' single 'Dynamite', an all-English song that was the group's first, peaked at number one on the Billboard Global Chart and remained on the chart for 18 weeks. That song alone generated an impressive figure of $1.43 billion.

“ARMY” stands for "Adorable Representative M.C. for Youth" and it carries quite some meaning behind it, given that "Army" is associated with the military, body armor, and how those two things are always together, the fandom name basically means that fans will always be together with BTS. Following the BTS style of clothes and hair, the Korean wave is a trend not only in lifestyle but in educational life too, as people started studying about Korean culture and language. For helping the fandom to understand the messages in the songs, some phrases are placed in English, mainly in the chorus, making their audience more interested in discovering the rest of the song. In Brazil and Indonesia, for example, the demand for courses to learn Korean has increased among young people, and some schools have started to offer the language as an extracurricular subject. This further proves the proportion that the Korean wave took to place itself as part of the culture of these and many other countries.

After garnering the hottest awards in western pop music and establishing its position on charts and radio, the impact of K-pop has already broken through language barriers as well. Inspired by the sound, thousands of fans are dedicating themselves to learning the Korean language.“Learn Korean with BTS” is an ongoing video series created by BTS that makes it easy and fun for global fans to learn Korean. The series is a way to help BTS fans from around the world to enjoy BTS’ music on an even deeper level.